Samsung Electronics is boosting the luminance of its 2022 Neo QLED TVs and throwing in some new artificial intelligence-powered smarts that not only improve picture quality but also reduce harmful blue light.

In addition, the company has announced its premium MicroLED TVs are getting a big brightness boost, with more size options and smart features.

With its big rival LG having already announced its revamped OLED EX display technology for 2022, Samsung was expected to respond in kind and it hasn’t disappointed.

One of the biggest changes in Samsung’s 2022 4K and 8K Neo QLED TV range is the improved luminance scale, which has been bumped up from 12 bits to 14 bits to ensure greater clarity of each detail on screen. Higher luminance is combined with a new Shape Adaptive Light technology that uses AI to analyze lines, shapes and surfaces on screen. With this information, Samsung says it’s able to better control the “shape of light” emitted from each LED and adjust it in real-time to enhance the brightness and accuracy of all shapes within the image on screen.

Picture quality is further boosted by Samsung’s new Multi-Intelligent Picture Technology. This is meant to create the impression of more depth, which it does by using AI to determine the outline of each object on the screen. The technology then gets to work, carefully enhancing the details of each object to ensure it looks more “three-dimensional”, Samsung explained.

The extremely realistic details Samsung is promising can only really be appreciated on a display that’s been properly calibrated for the environment its in. Acknowledging that, Samsung says its 2022 Neo QLED TVs will come with a new Smart Calibration feature that allows users to quickly calibrate the display using an app on their smartphones in just 30 seconds. Users can also opt for a more thorough calibration that Samsung says will optimise the picture on a par with professional calibrators in around 10 minutes.

Samsung is also promising greater eye comfort with its new TVs, with intelligent Neo QLED LEDs that can automatically adjust their brightness levels based on the illumination of the surrounding environment. Its TVs will rely on built-in sensors to determine the ambient lighting conditions and adjust blue light output accordingly.

Besides the improved picture quality, Samsung’s 2022 Neo QLED TVs will also dramatically enhance sound through its OTS Pro with three layer technology. Its flagship QN900B model will be fitted with powerful, up-firing speakers to create a new overhead sound dimension. Samsung says the result will be a 6.2.4 channel sound system with 90 watts of power, enabling an unsurpassed and truly immersive Dolby Atmos experience.

The increased audio output is paired with a new Human Tracking Sound feature that will be available on several models from the Samsung Q70B and above. It works by analysing each voice and tracking where the actor is located on the screen, so as to emulate the precise location of that sound. Meanwhile, Samsung’s Q Symphony surround sound tech has been boosted with added synchrony, so soundbars will be able to work in harmony with the Neo QLED TVs’ built-in speakers.

Samsung has been working equally hard on improving its MicroLED TVs and it has racked up some impressive achievements. 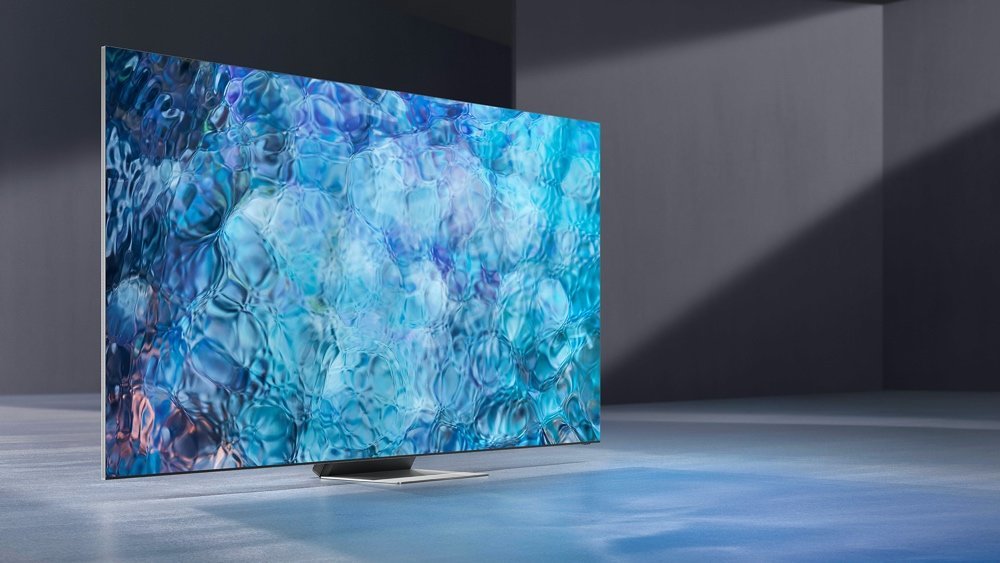 MicroLED is a newer, self-emissive display technology that’s said to take all the best bits of OLED but without its shortcomings. The self-emissive properties mean that each pixel can switch itself off, just like OLED, to be completely black, while those next to it can display incredibly vibrant colours to create stunning contrast that simply isn’t possible on a regular LCD TV, for example.

They should also be incredibly bright too, with Samsung saying its 2022 MicroLED TV models will be able to deliver a peak brightness of 2,000 nits, making them twice as bright as most conventional displays are today. Colour accuracy is also expected to be incredible, with Samsung claiming 100% coverage of the DCI and Adobe RBG colour gamuts.

The MicroLED TVs boast a variety of new features too include an Art Mode similar to Samsung’s The Frame TV, that transforms the TV into art gallery, and a nifty Multi-View mode that splits the display into four separate screens that can each display separate content.

Best of all perhaps, Samsung has announced its MicroLED TVs will finally be available in a range of size options. In addition to its existing 110-inch version, the company said it will also launch smaller 89-inch and 101-inch models sometime this year, raising hopes that the TVs might be starting to become more affordable.