Samsung Display says it has begun installing production equipment for its next-generation quantum-dot OLED TV displays at its manufacturing plant in Asan, South Korea, as it prepares to exit the liquid crystal display business. 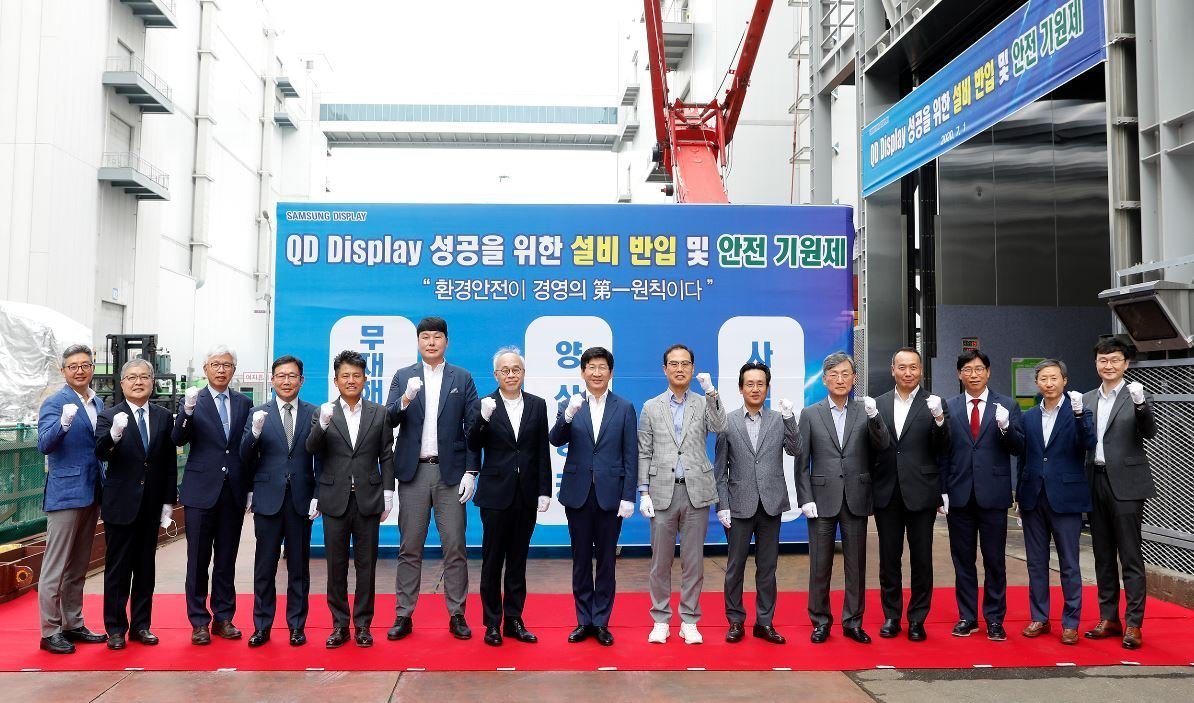 The company said during a special ceremony that its QD-OLED manufacturing setup is expected to be ready to run by the end of the year, with test operations set to take place in stages from early next year.

Samsung Display announced last October it was planning to invest 13.1 trillion won (around £8.84 billion) as part of a plan to upgrade its LCD production lines to QD-OLED and produce more advanced display panels. The investment will be rolled out over five years, until 2025, it said at the time.

Samsung’s QD-OLED display technology is different LG Display’s White OLED, which is the basis for all currently available OLED TVs on the market. According to a report earlier this year from Display Supply Chain Consultants, Samsung’s technology will use a blue OLED combined with colour filters and quantum dots to produce red and green sub-pixels. Analysts say the method will deliver advantages over White OLED that include more saturated colours, while still providing traditional OLED benefits such as deep blacks and higher contrast.

Samsung Display’s QD-OLED panels will also use just two emitting layers compared to four used by LG Display. As such its full stack will consist of just 13 layers compared to 22 used in LG Display’s OLED TVs. This should translate to fewer deposition stages, lower material costs and improved production yields.

DSCC estimates the materials Samsung will need to manufacture a square metre of QD-OLED substrate will cost just $26, compared to $95 for a square metre of White OLED. In addition, Samsung Display’s eventual production capacity is likely to be larger than LG Display’s once its operation gets up and running.

Of course, this could give Samsung Display a significant advantage over LG Display in terms of pricing, which will make it far easier for the company to convince other TV brands such as Sony and Vizio to buy its panels.

That said, LG Display is also believed to be carrying out its own research into QD-OLED displays.

Samsung Display reportedly showed off an early prototype of its QD-OLED display behind closed doors at this year’s Consumer Electronics Show in Las Vegas. According to sources privy to the demonstration, the QD-OLED display they saw had superior colour reproduction and wider viewing angles to rival LG Display's white OLED-based displays, but struggled to deliver the same deep blacks. It also had issues with heat, the report said.

With its focus now on QD-OLED, Samsung Display is planning to exit the LCD display business completely by next year. The plan is to convert all of its existing production lines to QD-OLED, in a move that should boost the company’s profitability and competitiveness.

That doesn’t mean Samsung will stop selling LCD TVs altogether though. With mass production of QD-OLED still likely to be some way off, the company has reportedly opted to source its LCD panels from China’s CSoT and Taiwan’s AU Optronics.

Samsung Display is also betting on another promising display technology called MicroLED that comprises millions of microscopic LEDs that emit their own light. The design eliminates the need for a backlight, thereby making the technology much more power-efficient than traditional LCDs. MicroLED is also said to deliver superior brightness and contrast levels to OLED, and is also more durable, with a lifetime of up to 100,000 hours of use.

MicroLED is also unique in that it’s modular in nature, which means it’s possible to build displays in any shape or size. This means it can support any resolution too, up to 8K and beyond, as the pixel density can be maintained no matter how large the screen is. MicroLED can also deliver any kind of aspect ratio you want.

Although MicroLED is still a nascent technology, Samsung has already launched one product, its enormous 146-inch The Wall TV, which went on sale in January 2018.