Samsung has sprung a major surprise on the eve of the Consumer Electronics Show, saying it’s teaming up with old rival Apple to enable access to iTunes movie and TV content on its 2018 and 2019 smart TVs. 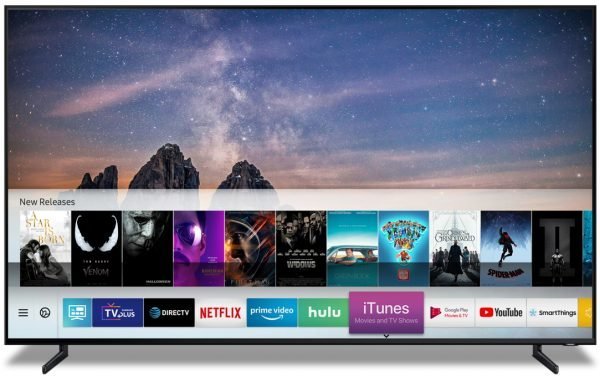 The content will be made available via a dedicated app called iTunes Movies and TV Shows, which will be available in 100 countries on Samsung’s most recent TVs. The app will be pre-installed on 2019 models, with 2018 versions to get access after a firmware update.

In addition, Samsung has also announced its TVs will support AirPlay 2. This is Apple’s proprietary content streaming system that enables users to send audio or video from an iPhone, iPad or Mac computer, to any other supported device over Wi-Fi or a wired home network.

Some say the new iTunes Movies and TV Shows could even be a prelude to the launch of a long-rumoured video streaming service Apple is said to be working on.

The alleged streaming service will also be available in exactly 100 countries, hence the tenuous link with the new app announced today. The iPhone maker already offers a music streaming service called Apple Music which competes with services such as Spotify. The new video streaming service is said to be gunning for Netflix however, and will reportedly operate on a similar model, with an unlimited amount of streamed content available from a single monthly subscription.

Although Apple has never confirmed its plans for the new service, it’s fairly apparent the company needs to do something given that its Apple TV device is lagging way behind the likes of Netflix and other rivals such as Amazon and Roku when it comes to video streaming market share. Apple is also desperate for additional revenue streams after slashing its profit projections following slower than expected iPhone sales over the Christmas period. That saw the company’s share price fall by almost 10 percent, wiping out around £60 billion off of its value.

As for AirPlay 2 support, this will be available in 190 countries and will allow content to be streamed from Apple devices directly to Samsung’s TVs.

“We look forward to bringing the iTunes and AirPlay 2 experience to even more customers around the world through Samsung Smart TVs, so iPhone, iPad and Mac users have yet another way to enjoy all their favorite content on the biggest screen in their home,” said Apple’s senior vice president of Internet Software and Services, Eddy Cue.

Apple added in a separate press release that AirPlay 2 will also be made available to other “leading TV manufacturers”, though it hasn’t named any so far. There is no timeline for when this might happen, but Samsung’s support will be built into its 2019 models, with support for 2018 models to be added via a firmware update.