Rumours that Samsung Display could be working on a Quantum Dot OLED TV first emerged earlier this year. Now, more solid evidence of its plans has emerged courtesy of a new industry report from Display Supply Chain Consultants.

A big part of DSCC’s latest report on the OLED production industry focuses on the opportunity for Quantum Dot, or “QD OLED”, and how feasible its manufacture might be.

The prospect of Quantum Dot OLED TVs has had enthusiasts rubbing their hands with glee in anticipation. OLED’s best qualities are well known, for example the extremely rich contrast ratios that LCD displays can only dream of. Meanwhile Quantum Dot is a newer kind of display technology that involves using semiconductor nanocrystals to produce pure monochromatic red, green, and blue light that delivers more vibrant, natural colours.

To date, Quantum Dot has only been used with LCD TV displays, and so combining it with the superior OLED can only be a good thing. And according to DSCC’s report, Samsung is apparently trying to work out how to do just that.

DSCC cites sources as saying that Samsung is likely to begin production of its first QD OLED displays as early as next year. The company plans to start with 5,000 units per month to begin with, before ramping up production to 30,000 units a month by 2021 if it can make things work.

The only problem is it’s still quite a big “if” as Samsung faces a number of challenges in order to successfully manufacture QD OLED at scale. According to DSCC’s report the two main challenges involve creating a “good blue OLED” and making the Quantum Dot Colour Converter which is used to manage the light emitted.

DSCC says Samsung will most likely begin by using a double-layered fluorescent blue emitter to try and create a good blue, although ultimately it may require a new, next-generation blue OLED emitter material such as phosphorescent or TADF in order to perfect this process. Neither option will be easy, but DSCC says Samsung’s proposed QD OLED structure has some significant advantages over LG Display’s rival White OLED approach. The main one being that Samsung’s tech will only use three subpixels instead of the four used by LG. 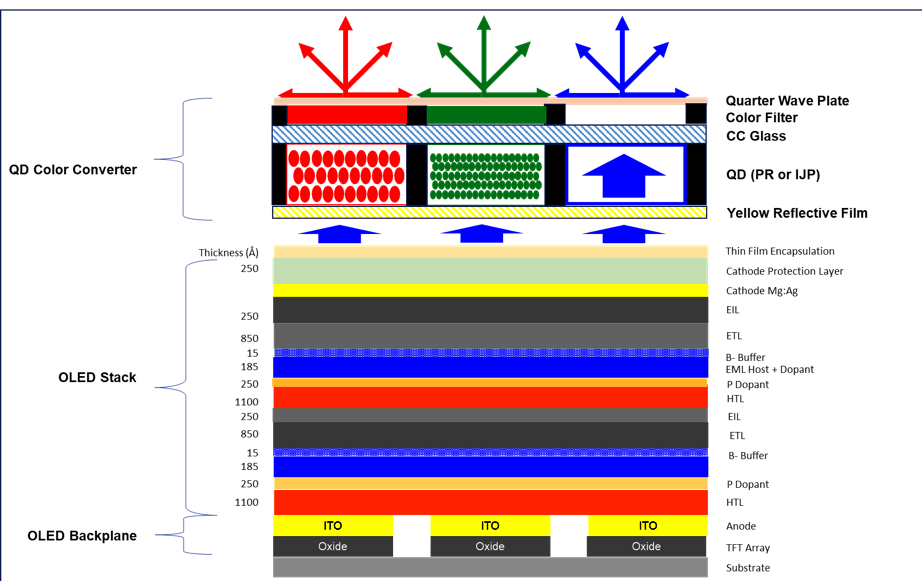 Samsung’s QD OLED stack also has far fewer layers at 13 compared to LG’s White OLED, which is comprised of 22 layers. Because there are not as many layers, Samsung’s tech requires fewer deposition stages, leading to cheaper manufacturing costs and, presumably, higher yields.

A more difficult challenge for Samsung lies in creating the Quantum Dot Colour Converter, as illustrated in the diagram below:

The technical challenges are complex, not least because quantum dots emit light in all directions. Therefore Samsung’s proposed structure requires the use of a Yellow Reflective Film to allow for blue light to pass through directly, with reds and greens being reflected forward. There’s also a need for a “quarter wave plate” to shut out any ambient light that might negatively effect the sensitive quantum dots. Finally, Samsung will need to design a colour filter in front of the red and green sub-pixels to filter out the remaining blue light, because current quantum dots are unable to absorb all of this.

DSCC notes that these challenges will be difficult to overcome, but the nature of the simpler stack it’s proposing means it probably has both the financial resources and a huge incentive to work on this. For example, DSCC estimates that Samsung’s QD OLED displays would cost $26.03 per square meter, compared to $94.91 per square meter for White OLED.

Another, albeit smaller problem Samsung may have is that QD OLED is less attractive to OLED materials suppliers, as the revenues from these products would be much smaller.

It remains to be seen if Samsung will overcome these obstacles to produce its first QD OLED displays, and there’s still a chance it could scrap the project entirely if it fails to do so, DSCC said.