LG might be getting nervous following yet another report that highlights the so-called “screen burn” issues affecting its popular OLED TVs. 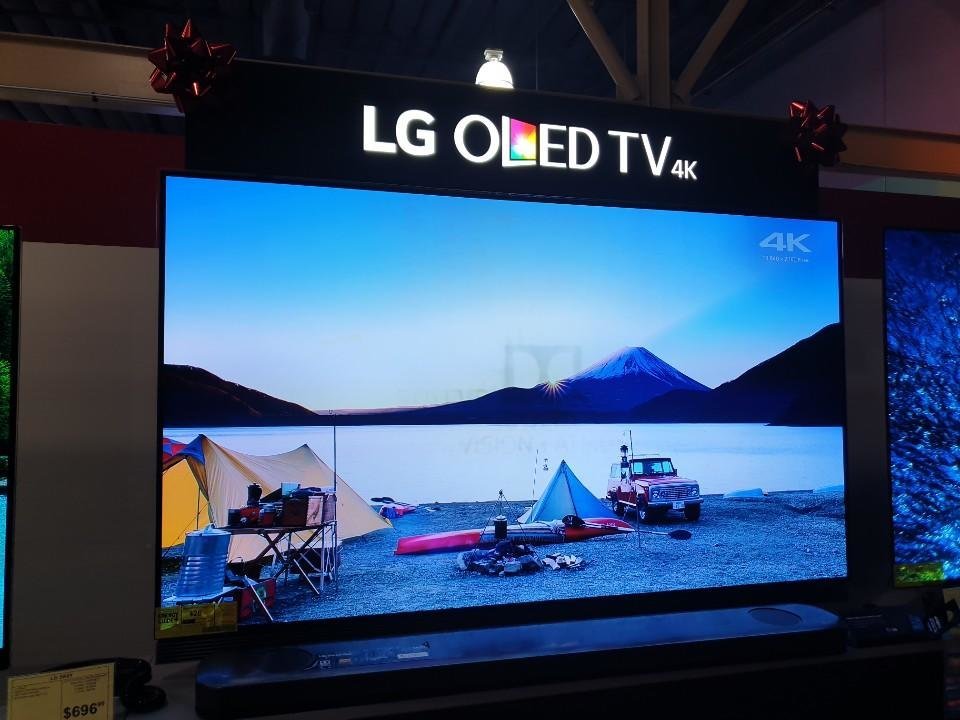 ZDNet reported this week that an LG OLED TV has shown signs of screen burn while on display at a branch of Fry’s Electronics in San Jose, USA. The TV screen clearly shows the Dolby logo “burnt-in” to the center of its display, as seen in the image above.

Screen burn is a controversial topic because the problem hasn’t been widely reported by consumers. Still, it’s a pressing issue due to its seriousness. Screen burn occurs when a persistent part of the image on-screen, such as the navigation buttons on a phone, or a logo, news ticker or a scoreboard on a TV, for example, lingers on screen as a ghostly background even after the image has gone or the device has been switched off. In more extreme cases the ghostly image burn may remain on the screen permanently, as appears to be the case with ZDNet’s latest example.

This particular model is the LG OLED 65E7P TV. It was first launched in 2017 as a mid-tier option and is still on sale, though current available models are likely to be newer as LG generally likes to keep its inventory low and manufacture specific TVs according to demand, ZDNet reported. The 65E7P is no longer being manufactured however, and will be removed from sale once existing inventory has been sold.

Obviously, screen burn could turn into a major headache for LG if the issue becomes more widespread than it currently is. But for now, the company is standing by its claim that OLED TVs can last for 30,000 hours, or around ten years if watched for an average of eight hours per day, without any visible signs of screen burn.

"Under normal TV use as a video display or games display, OLED technology does not suffer from permanent image retention,” the company told ZDNet in a statement.

But there’s mounting evidence to suggest LG’s claim may not be entirely accurate.

For example, recent research by the consumer tech testing website Rtings showed that the average OLED display can burn out after just 4,000 to 5,000 hours of use under certain conditions. Moreover, both LG and Sony, which uses LG panels for its own OLED TVs, have recently introduced picture dimming algorithms and pixel refreshers via software updates that were apparently designed to reduce the risk of screen burn. The updates were pushed out even though many consumers complained that they reduce the overall image quality of their TVs. The decision to push out the updates anyway implies that both companies see screen burn as a major potential problem, even if they won’t admit it publicly.

ZDNet says that other LG OLED displays shown in public have also suffered from similar problems. It cites the example of LG OLED TVs installed at both Incheon International Airport and the N Seoul Tower in South Korea that had to be replaced after several months.

Still, it must be noted that actual consumer reports of screen burn are almost non-existent. It's also worth noting that the above examples of screen burn all involved OLED TVs that were being used commercially, displaying the same image for many hours, which isn't how TVs are used in the typical home. In addition, consumer OLED TVs have a built-in compensation cycle that runs in standby mode to clear up image retention, whereas retail stores probably just do a hard power down without letting the compensation cycle run, which increases the risk of long-term problems.

Even so, the reported issues suggest there could be a fundamental problem with LG’s OLED technology, which has been manufactured using more or less the same process since it was first commercialised in 2012. The potential for screen burn to become an issue with commercial TVs later on will be all the more alarming for LG as it has increasingly thrown more resources at OLED to the detriment of LCD, which is being hit by falling prices and is widely viewed as an inferior display technology. LG is aggressively pursuing OLED in order to extend its lead in the segment. Currently, it is the only company capable of manufacturing larger OLED panels at scale, and recent statements suggest it’s keen to exploit that advantage.

LG’s OLED technology is rivaled by Samsung’s more recent Quantum Dot LCD displays, known as QLED, which are said to deliver a similar picture quality. LG will obviously be worried that its OLED sales could be impacted if screen burn issues become more prevalent.

That could explain why LG recently acquired patents from the American chemical manufacturer DuPont that relate to “Soluble OLED displays”, which are built using an alternative process called the inkject printing method. Soluble OLED displays are apparently more cost-efficient to build, but it’s not clear if this process would help to minimize screen burn issues.