Google is rapidly gaining in the battle for Smart TV operating system dominance. Its Android TV/Google TV platform is closing in on LG’s webOS and could soon become the second most popular overall, behind only Samung’s Tizen operating system. 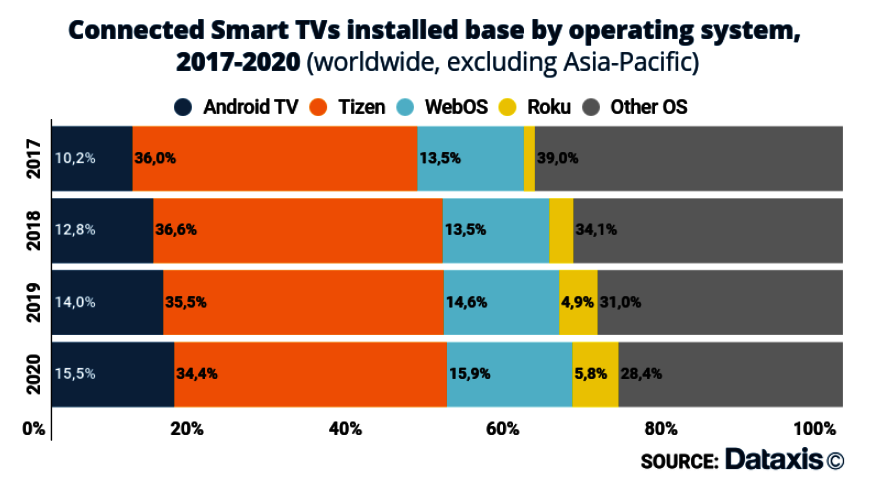 Tizen meanwhile is losing market share, while Roku – which is especially big in North America – is also capturing a bigger slice of the market with each passing year.

Dataxis, which is tracking the market, said 2022 will be a “decisive year” for Smart TV operating system makers. It explained that while the market is still crowded, all the signs point to consolidation in the coming years.

"Samsung's Tizen and LG's webOS have been the two most used Smart TV platforms for years, but according to Dataxis' new research, the Roku OS and Google's Android TV have experienced the largest growth in 2020 and 2021, and the trend is expected to continue for 2022,” the analyst firm explained.

Samsung’s Tizen OS led the way in 2020 with a 34.4% market share, followed by LG’s webOS with 15.9%, Android with 15.5% and Roku on 5.8%. The rest of the market, including Amazon’s Fire TV, Hisense’s Vidaa, Panasonic’s My Home Screen, Vizio’s SmartCast etc, has a combined share of 28.4% but that has been shrinking with each passing year.

While Google continues to transition Android TV to Google TV, it has also been busy grabbing more partners in the shape of Hisense and Skyworth. TCL North America will also use the Google TV platform in more models in 2022.

Roku has tried to consolidate its position outside of North America but its plans for dominance are clearly hampered by being a late entrant to the European market. However, it did finally appear on some TCL TVs sold in the U.K. last year and has plans to expand other European countries and South America.